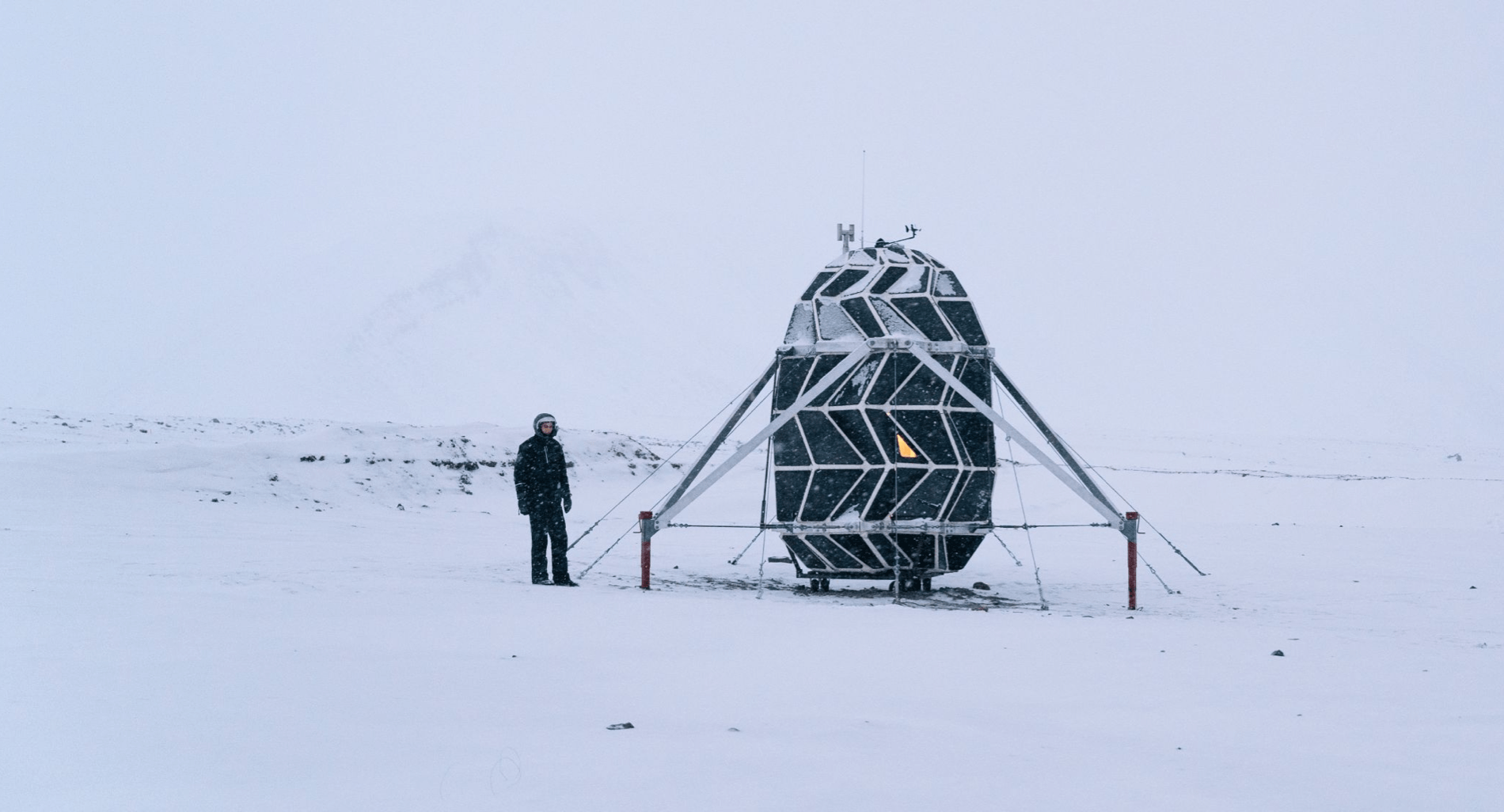 We have been studying Mars for a few decades now, and with the latest research, technological developments, and our inability to slow down climate change, inhabiting other planets seems to be more of an imminent reality than a distant future possibility. SAGA Space Architects are designing habitats to make Space livable for future Space travelers, in a way that supports social sustainability and mental well-being.

SAGA Space Architects is a modernistic design practice that creates potential homes and habitats for space dwellers. One of the goals of SAGA is to get us closer to creating concept habitats and livable homes that we could co-inhabit together in space. Sometimes we forget that we are already “living in space” here on Earth and that we can design for other planets with Earth in mind. “SAGA is already doing this”. This design practice and new way of designing architecture opens up a conversation about why space design is so important for designers. A topic that seems to be buzzing in all of our minds as the new paradigm towards the future shifts.  Should creatives and designers start considering how to create and conceptualize designs we can use for space? After all, it’s not a matter of why we should go to space, but rather how and when. Designing for space is overlooked by the masses; for most of us, the only resources to refer to outer space are sci-fi movies, shows, books and the spacecrafts we have already made to go to space. Which leaves an open door for so many different design solutions for the extraterrestrial unknown world, whether that be designing for space interiors, exteriors, or the tangible objects we can use in space. There are an infinite amount of different possibilities.

Recently, a mixture of space architects, engineers, and programmers at SAGA built a pod titled Lunark, and deployed it in Northern Greenland to simulate living on the Moon, as well as a small habitat in the Negev desert of Israel titled Mars Lab, and Dandelion, a concept for Mars, to mimic living on Mars. When designing Dandelion, the fundamental conditions of the planet Mars and the similar climate of the desert in Israel were taken into consideration for design solutions and constraints. The valves and folds of the spacecraft would work with Mars’ overwhelming amount of dust and transform it into static electricity.

Both Dandelion and Lunark take on different aspects of what is known as ‘Parametric design’. Designers use software to create warped complex visually stimulating structures that are computer generated; parametric design is often seen in architecture. It is used to create more efficient designs and allows you to explore more options. Parametric design specifies key parameters of projects and makes it easier to collaborate on interactively making changes. Visually, parametric design resembles craters that belong on the Moon, rock formations, and the waves and folds of seeds and plants. By using technology, designers can create complex designs that also incorporate fundamental conditions of the particular environment or design solution. As stated before, we are already living in space here on Earth, an environment we can learn from and create positive designs that work with the conditions of Earth and Space – while also keeping in mind functionality, form and aesthetics. A lot of parameters have to be studied about the planet in order to simulate living on that planet on earth. The recent Lunark expedition to Northern Greenland by SAGA had to take into account the harsh climate conditions that reflected the  moon’s parameters. Very little light, rigid temperatures, extreme isolation, and a lack of external resources. The strong wind chill in Northern Greenland proved to be a design constraint that doesn’t exist on the moon.

Sebastian Aristotelis is the CEO of SAGA Space Architects and an alumnus of the Royal Danish Academy of Fine Arts School of Architecture. He gave a talk at Design Matters 21 to talk about going to space and why it’s important. You can watch his talk by subscribing to Design Matters On Demand.

We had the chance to interview Sebastian to learn more about his work, the challenges Space designers are facing and how to incorporate the conditions of space into design.

What are some challenges you faced when designing and prototyping space habitats like LUNARK – for hostile environments and small uninspiring spaces that also have to be functional?

Space! Functional livable space is really difficult to achieve even though the habitat expanded 750%. Secondly, find materials that are durable, easy to clean and fire resistant whilst still being comfortable and tactile.

Looking at your prospects of 3DCP (3D Construction Printing) and your design ideas for Space Communities for the next 10 years –  what impact does climate change have on the way you think about our future here on earth?
Climate change is an ever present parameter as an architect. The best thing you can do is not to build anything new, however that is not a solution as we need more and more housing. Therefore we try to use what we have learned about living in space to create spatial-optimized houses for earth.

You mentioned Tabula Rasa when talking about your design process. What motivates and inspires you the most about creating something for space from a clean slate? Nature and evolution. We try to steal as many solutions from evolution and nature as possible. There are many clever structures if you know where to look.

How do you recreate environments that are as similar as possible to the ones in space or other planets to test your designs? You can find hostile locations like Northern Greenland, but how do you reproduce a different gravity, or lack of, for instance? The way liquids behave must not be overlookable in testing a design, considering accidents like the one happened to astronaut Parmitano.
The short answer is we can’t reproduce the lack of gravity at an architectural scale. It is possible to do reduced gravity studies on a physiological scale with bed rest studies and at the scale of plants by having them in a rotating gyro. However we did experience some of the muscle and bone atrophy astronauts experience in space, simply due to the limited space and not moving around a lot. Reduced gravity is only one of the stressors humans experience in outer space, most of the other stressors such as confinement, isolation and lack of stimuli are much easier to simulate here on earth.

How do you design the pod to maintain breathable air, being the space so small and shared by two people?
Luckily we do not have to design everything from scratch, we build on the knowledge by NASA, ESA and other space agencies. We dimensioned the habitat to fit a realistic ECLSS (Environmental Control and Life Support System), recreating a new version of ECLSS is beyond the scope of what we focus on, however we try to come up with adjustments such as the possibility for individual control of indoor climate, since we experienced that had a tremendous effect on well being and crew dynamics.

When you mentioned the window in your talk, I immediately thought of the film Aniara. In the film, people are travelling for years in space and the windows project images of Earth with nature and sunsets. Of course films are not reality, but perhaps this opens a conversation about the future and how space architecture and light design can be used to improve the mental health of space travellers. What are your thoughts on this, having experienced darkness and isolation yourself?
Movies are a huge inspiration for us, as I believe it is for many. They can tell us a lot about what can go wrong and what can go right. I am not familiar with Aniara, but I put it on my watchlist. There are many movies that have touched upon the element of light in space. I think it’s because movies are literally made with light, each frame is painted with photos, and space is often absent of light. As an architect i think light is one of the most effective architectural elements to play with, with little effort you can have a big impact on the user. Light is such an important part of our everyday lives, it has the power to change the atmosphere completely of any given space. Light in outer space is very alien, it almost doesn’t matter where you go, it will be difficult to find an equivalent to the Earthen light, and therefore it is our duty as architects to bring it.

One day, space travelling and the colonisation of other planets such as Mars will most likely become reality, making space travel accessible to “regular people” who are not trained astronauts. How does (or will) SAGA benefit people who are not trained astronauts through your designs and solutions?
We will make it easier for people to sustain a life in outer space for longer periods at a time without their health deteriorating, physically or mentally. It might be a more clear perspective to look at the alternative; it will be hard to create a sustained presence in outer space if people are surviving but suffering.

A lot of your space homes are inspired from seeds and plants. What are some of the fundamental things we can learn from nature and how can we apply it to livable space homes?
Nature can really tell us something about shape and form, it’s very expensive for organisms to build in terms of energy and resources. Through evolution nature has found very effective and strong ways of building itself. That’s some of the things we look at. From a more psychological view nature also informs us about how to live and how we as architects shape a good life for our inhabitants.

Circadian panel in the Lunark pod